President Trump’s proposed tariffs on China include a wide range of Apple products, including the Apple Watch, AirPods, Apple Pencil, HomePod, Mac Mini, as well as chargers and adapters for a host of products. The outcome of this proposal? Apple customers will have to pay more for Apple products, which could definitely hurt the company.

“It is difficult to see how tariffs that hurt U.S. companies and U.S. consumers will advance the Government’s objectives with respect to China’s technology policies. We hope, instead, that you will reconsider these measures and work to find other, more effective solutions that leave the U.S. economy and U.S. consumer stronger and healthier than ever before,” Apple said in a letter to the U.S. Trade Representative. 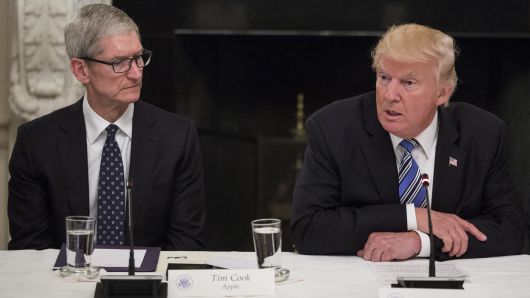 Apple CEO Tim Cook had brushed off tariff concerns, saying he was confident that tariffs would not affect the iPhone. It’s not a shock that the iPhone drives most of Apple’s profits; it wasn’t on the list as one of the products that would be affected by the tariffs.

Apple shares dropped 1 percent just before market closed on Friday, after gaining as much as 1 percent earlier in the session. You can read Apple’s letter here.